Via ferrata only for experienced climbers

The “Seewand” via ferrata at the back of the Hirschaualm in Hallstatt is not for beginners. Stamina and plenty of via ferrata experience are basic requirements for this route with difficulty level D-E. It is not without reason that every year numerous inexperienced climbers are rescued from this via ferrata by the mountain rescue service. Therefore, precise tour planning and an exact look at the current mountain weather should be the first priority. By the way, precise preparations also include checking the snow situation. Because there can be snow at the exit point of the via ferrata in spring and autumn. So be careful. Our tip: Check with the Hallstatt tourist office for the current snow conditions.

All paths lead to the Hirschaualm

For the "journey" to the start of the Seewand via ferrata on the unfortunately no longer managed Hirschaualm, there are two ascent variants. Whether a quick ascent or a more leisurely route - the choice is yours.

From the Hallstatt car park P1 via the Kalvarienberg above and then via the "Schöne Aussicht" in the direction of the Hirschaualm. With this variant, calculate about 1 hour's walking time to the “Seewand” via ferrata. The trail is a narrow path, but perfectly passable.

With the 2nd variant you start near the Hallstatt leisure centre on the Lake Hallstatt main road (L547) between Hallstatt and Obertraun. There is also plenty of parking here. The well-signposted trail begins on the opposite side of the road at the so-called "Kessel". It leads steeply through the forest and makes the ascent to the Hirschaualm all the faster. The walking time is about 30 to 40 minutes.

The duration of the ascent of 4 to 6 hours requires very good physical condition and appropriate climbing equipment, especially for this tour. The via ferrata is accessible from the end of June to mid-October. This continuously secured via ferrata, which was built in autumn 1997 by the mountain guides Helmut Putz and Gerhard Gangl on behalf of the Obertraun Tourist Association, is one of the most demanding via ferrata routes in the entire Alps with a via ferrata difficulty level D-E (according to a scale from A to E).

With its difference in altitude of almost 800 m and its magnificent view of Hallstatt, Lake Hallstatt and the entire Inner Salzkammergut, this via ferrata is certainly the largest of its kind in Austria. The starting point is the large car park at the public bathing area "Kesselgründe" halfway between Hallstatt and Obertraun; an information board there provides the most important information and useful tips. A hiking trail leads to the Hirschaualm (approx. 40 min.) to the entry point.

Final stop at the Gjaidalm

The very demanding ascent runs almost entirely on compact rock, except for a green section in the middle. At the upper end of this green section is a small cave, which is suitable for bivouacs and weather protection. For smaller breaks, there are beautiful spots on the wall with imposing views. After overcoming the upper, particularly demanding third section, you finally reach the exit, where you should reward yourself for your performance with a snack and enjoy the magnificent panorama.

Return with the Cable Car

The way back for climbing enthusiasts is an approximately 45-minute hike to the “Schilcherhaus” on the Gjaidalm, which is famous for its excellent “Kaiserschmarrn” desert. You then return to the valley via the three sections of the Dachstein Krippenstein cable car.

Please note the current travel times of the cable car for your way back. You will find these below under "Information at a glance". As a return option, you can take a taxi or the bus in the direction of Hallstatt. We wish you an unforgettable climbing adventure and please remember to prepare carefully for this "mountain gig"!

Safety on the rock face

In recent years rock climbing has developed encouragingly strong and each year inspires more and more people. Its versatility means you get a taste of everything: whether hard tracks in the Boulder room or indoor climbing hall, long routes with alpine ambience or leisurely tours on a sunny cliff - in climbing, regardless of age, everyone finds their individual conditions. Safety guidelines play an important role in enabling you to enjoy this fascination to the full. The best advice for "correct" climbing in the Salzkammergut region can be found here.

Further via ferratas on the Krippenstein 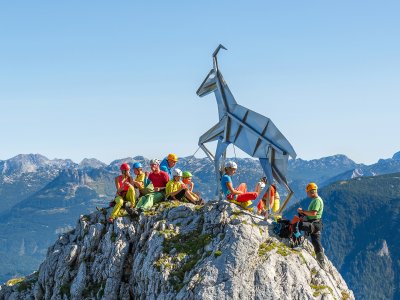 The family via ferrata on the 2000 meter high Krippenstein in Obertraun is the perfect beginner's via ferrata for children and beginners and besides a bit of adrenaline, offers a special mountain experience for the whole family. 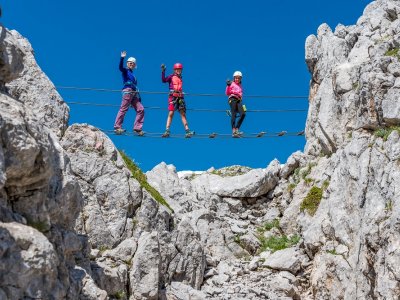