From the house of prayer to Church

Located directly in the centre of Hallstatt is the Evangelical Church, which was built as a house of prayer on the 30th October 1785. Following the order of the Emperor Franz Joseph I, all Evangelists were guaranteed full rights of citizenship and equality in their ecclesiastical and political life. This was the beginning of building of the new church. In October 1863, after only five years of construction, the new church was completed.

In the 16th century the Reformation teachings of Martin Luther fell in the Salzkammergut - especially among miners - quickly on fertile ground. Also the counter-reformation faced fierce resistance from the people in the area: 1601 all bridges were destroyed, the salt boiling pans emptied, transportation of wood and boats were blocked. Evangelical preachers appealed in Catholic churches for contributors to serve in the resistance against authority on matters of religion. However the troops of the Archbishop of Salzburg suppressed this rebellion: the leaders were sentenced to death and their houses set on fire. Like most places in the Salzkammergut Hallstatt also lost his privileges for a few years. 1734 once again soldiers marched in: 300 Protestants - not counting women and children - from Hallstatt, Ischl and Goisern and were transported, under cover of darkness with salt barges and had to immigrate to Transylvania.

Only the "Edict of Toleration" of Emperor Joseph II (1781) allowed the Protestants restricted practicing of their religion. At that time, 500 Hallstätter confessed to be of Evangelical faith. Three years later, they had already built a house of prayer and set up a private school. The Neo-Gothic Evangelical Church of Christ was founded in 1863, after through the "Protestant Patent" of Emperor Franz Joseph I , the Evangelical faith was awarded complete equality to the Catholic.

We invite you. Celebrate a festive service with us. We look forward to guests from all over the world. Please note: This Christmas service only in german language! 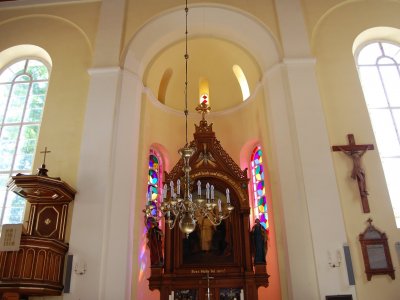 Today the Evangelical Church, just steps from the Hallstatt market place, also regularly holds cultural concert events. Especially in the summer months, many musicians from around the world play in the Hallstatt church. At the portal to the church itself is a board with additional information on church’s history in both German and English, and is also part of the audio guided tour of Hallstatt.