Home Restaurants Restaurant in the Rudolsturm in Hallstatt

Whether you want to visit the oldest salt mines in the world, or take a selfie for your friends and acquaintances on the "Top of Hallstatt" Skywalk , the restaurant in the old defence tower is always worth a visit. Also hikers on the long-distance trails such as the "BergeSeen Trail", the "SalzAlpenSteig" or the "Salzkammergut Soleweg" have already discovered the sumptuous resting place.

Whether on your way across the SalzAlpenSteig, along the oldest pipeline in the world or on the long-distance trail - visitors from all over the world will not only enjoy the hearty, typical Austrian cuisine but also the wonderful panorama view of the southern part of the fjord-like Lake Hallstatt from the large terrace and the cosy parlour. Sweet tooths will find everything their heart desires high above the old salt mining town. Double pleasure at a historical place ...

Standing at the entrance to the Salzberg high valley above Hallstatt, Austria, the original structure of the Rudolfsturm (Rudolf’s Tower) was a medieval defence tower dating back to the late 13th century. From that time until 1954, the tower served as a residence for the respective mining operations manager.Its significant placement about one kilometre west and above the centre of the village of Hallstatt and in the midst of the landscape of the UNESCO’s Hallstatt-Dachstein Salzkammergut World Heritage site, means the tower offers an exceptional view of Hallstatt, the Hallstätter See (Lake Hallstatt) and the surrounding mountains. The building has undergone numerous structural changes over the centuries and is now used as a restaurant.LocationIts conspicuous site upon the so-called Turmkogel might have been significant in prehistoric times as well.

It is adjacent not only to the world-famous Hallstatt burial ground to the east, but it is also the only place in this high-elevation valley upon which the sun shines during the winter solstice.Middle AgesThe architectural history of the Rudolfsturm – which was known as the "Ruedolfstain" in the 16th century – has been thoroughly examined in the literature; an article written by Georg Heilingsetzer is particularly noteworthy in this regard. 1284 is the year most often specified as its construction date, and when this is cited, Dicklberger (1817) is the source named. But there are also sources giving the construction date as 1294.Modern EraAccording to Heuschober (1903), the stone structure to the southwest – connected to the tower only by a wooden vestibule in the early 19th century – housed the "Schünzimmer" on the ground floor, i.e. the work room of the Markscheider (mine surveyor), who drew up the mine plans. The original layout of this room corresponded to that of the kitchen above it, and both rooms served as a junction for the entire building complex.

Just like the rooms in the tower, the rooms in the building on the southwest side had windows facing both the salt mine and the market town of Hallstatt. A laundry room and a chamber with a natural spring were built onto the mountain-side of this structure and covered by a monopitch roof; these were demolished in 1833 during the course of renovation work. It seems important to mention in this context that the wooden vestibule directly attached to the tower, as well as the Schünzimmer and the overlying kitchen, all had an open layout in common; all were situated along the axis between the salt mine and the market town of Hallstatt and no transverse interior walls interfered with these spatial relationships and their horizontal dynamic.20th CenturyAn arbour was added in the southwest corner of the annex in 1903, but it was not preserved. Its design reflected the rustic style of the bourgeois pastime of taking summer holidays, which was popular in that period, featuring cut planks near the parapet and large areas of glass installed in its mullioned structure.

The structural interventions on the Rudolfsturm that were carried out between 1910-1955 are illustrated in the description of the building complex written by the Hallstatt salt mine administration in 1908.In 1954, the Rudolfsturm lost its designation as the mine manager’s headquarters – and thereby its function as an administrative building – when the salt mine’s administrative operations were transferred to the former hospital near the mouth of the mine gallery during a company conversion.The subsequent conversion of the Rudolfsturm into a restaurant preserved the utility value of the property and guarantees its continued existence.

The tourism boom in the 1960s necessitated an expansion of the available space, which was accomplished through the additional construction of a "hall" directly adjacent to the northeast side of the tower. Typical of this period, this annex was equipped with large windows on three sides, and the two doors aligned with the structure’s axis unpretentiously integrate a passing-through motif – the link between the salt mines and the market. Snow pressure caused this addition to collapse in 2006 and its remnants were razed. The Rudolfsturm was renovated for the 2008 Upper Austrian Regional Exhibition and supplemented with an extra annex on the side facing the mountain.

Our tip: For those with a little time on their hands, it is worth going up to the upper floors of the ancient defence tower. Here is a permanent exhibition on the changing history of the "old building". A look around is always worth it. Furthermore, from here you have a magnificent view over the lake. Give it a try!

Dinner is served - a taste of Austria

“It is well known that eating and drinking sustains both body and soul”. People within the UNESCO World Heritage region of Hallstatt Dachstein Salzkammergut stay true to this old saying. Sometimes rustic, sometimes modern, but always authentic – that is the cuisine within the Salzkammergut. This includes traditional meat dishes as well as heavenly sweet pastries and, typical for the lake region of the Salzkammergut - exquisite fish specialties. Connoisseurs can also enjoy an incomparable mix of culture, history and regional delicacies at numerous events between mountains and lakes. Let yourself be pampered; In the summer after a long mountain or bike tour. In winter, after an unforgettable day on the slopes or simply by a romantic dinner during your holiday in the Salzkammergut. Let yourself be inspired and take a look at our culinary hosts within the Dachstein Salzkammergut holiday region. We wish " Guten Appetit". 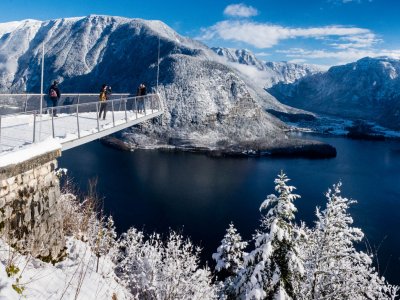 Hallstatt | Rudolfsturm: Standing at the entrance to the Salzberg high valley above Hallstatt, the original structure of the Rudolf’s Tower was a medieval defence tower dating back to the ate 13th century. 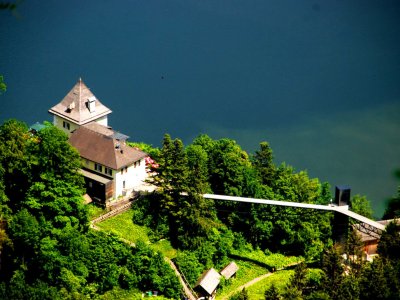 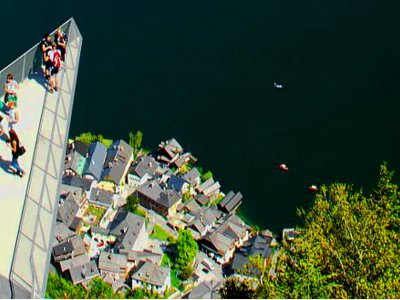 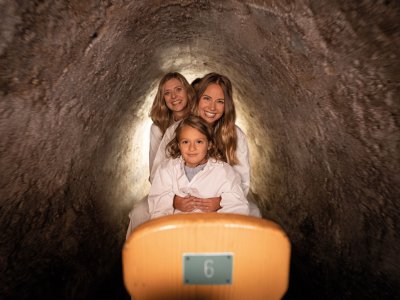 Daily tours through the Salt Mine "Salzwelten" in Hallstatt

Feel the magic of bygone days and immerse yourself in a magical realm of glistening salt crystals, mysterious mine tunnels, where history comes alive. 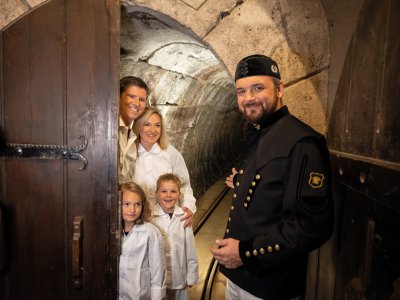