he Hallstatt necropolis is one of the most important burial places of prehistoric times. Between 1000 and 500 B.C., some 4,000 people were buried here, and the richness of the grave furnishings found here gave the Elder Iron Age in Central Europe the name "Hallstattzeit". Ever since, "Hallstatt Culture" has become a clearly-defined term in prehistoric research, denoting the material culture in the Alpine region between the 8th and the 50 centuries B.C.

In 1846, the managing director of the Hallstatt salt mines, Johann Georg Ramsauer, discovered the graveyard-like necropolis. He managed to unearth some 980 graves up to 1863. His talent at drawing, his quest for knowledge and his profession as a miner allowed him to become one of the pioneers of modern archaeology. Ramsauer was one of the first to document in drawings what his excavations destroyed. Today, his findings are preserved at the prehistoric department of the Natural History Museum of Vienna.

Dinner is served - a taste of Austria

“It is well known that eating and drinking sustains both body and soul”. People within the UNESCO World Heritage region of Hallstatt Dachstein Salzkammergut stay true to this old saying. Sometimes rustic, sometimes modern, but always authentic – that is the cuisine within the Salzkammergut. This includes traditional meat dishes as well as heavenly sweet pastries and, typical for the lake region of the Salzkammergut - exquisite fish specialties. Connoisseurs can also enjoy an incomparable mix of culture, history and regional delicacies at numerous events between mountains and lakes. Let yourself be pampered; In the summer after a long mountain or bike tour. In winter, after an unforgettable day on the slopes or simply by a romantic dinner during your holiday in the Salzkammergut. Let yourself be inspired and take a look at our culinary hosts within the Dachstein Salzkammergut holiday region. We wish " Guten Appetit". 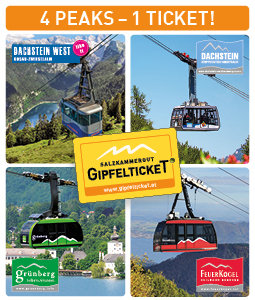