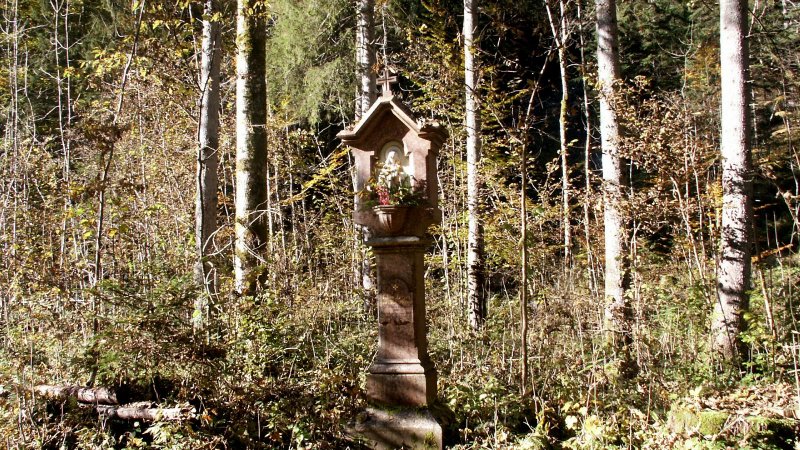 Contemporary witness at the edge of the path

The wildly romantic nature of the Echerntal fascinated painters and literati more than a hundred years ago. To this day, the roaring Waldbach, the high rock faces and the lovely pleasure trails still inspire people from all over the world. And time and again visitors can still find many remarkable places along the edge of the trail, during a walk or a long hike. For example, the wayside shrine of a certain Duke of San Marco. The stone testimony, of the Hallstatt lover who lived between 1829 and 1888, can be found shortly after the “Kreuzstein” in the direction of Waldbachstrub waterfall.

With the opening up of the Dachstein by Friedrich Simony from 1840, the spectacular excavations at Hallstatt Salzberg by mine manager Raumauer from 1846 and visits by travel writers, Hallstatt was brought to the public eye. Emperor Franz Josef I had his summer residency in Ischl (from 1906 Bad Ischl) and of course visited the now famous market town of Hallstatt during their excursions and learned to appreciate its natural beauty. Thus, the town developed into a destination for excursions of many courtiers and the ‘in-crowd’. A hike "in his Majesty’s footsteps" was then a good thing in those days.

Summer in the Salzkammergut

In the wake of the noble prominence, the married couple San Marco also made acquaintance with Hallstatt. After the Duke's early death, the Duchess then donated the monument, and placed it on the edge of the path.

The Duke of San Marco, who came from Naples, had acquired the title of nobility with money. Until the end of the kingdom of Naples and Sicily, he was the patron of the last king, Francis II. After the invasion of Garibaldi in 1860, the king went into exile and along with him the duke. The couple San Marco spent the spring in the castle in Komlosch (Banat), the summer in Ischl, the autumn in Vienna and the winter in Cannes on the French Riviera