How we "beat" the Chorinsky Lock

A few hours before we beat the lock we close the gates. The storage level gets up to the upper side of the lock gates. The source for the slack flow is situated approx. 200m upstream. Depending on the flow conditions of the Weißenbach Valley in Bad Goisern, about 4000 cm³of water get retained, that burst out within 5 minutes during the beating of the gates. So there are about 13 cm³ of water per second, dashing down the stream.

Bad Goisern | Chorinsky Klause (logging dam): Through the romantic Weißenbach valley to the last wooden logging dam in Austria. About a three-hour adventure hike for the whole family. 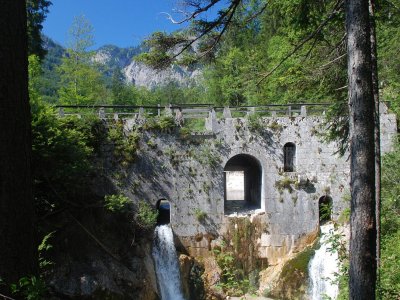 So much to experience!

A holiday in the UNESCO World Heritage Region of Hallstatt Dachstein Salzkammergut offers so much more than just sightseeing, culture and pleasure. In Bad Goisern on Lake Hallstatt, Hallstatt and Obertraun, you have the opportunity to fully experience all types of action sports and satisfy your craving for adventure. Hiking and mountain biking as well as climbing, swimming and even scuba diving are only some of the possibilities for getting out and enjoying the natural surroundings. The extraordinary landscape of the Salzkammergut is made for outdoor activities. From swimming in the crystal-clear lakes and rafting on the Traun River to paragliding from the 2000 meter Krippenstein in Obertraun, you can push yourself to the limit during an active holiday in the Lake Hallstatt region.