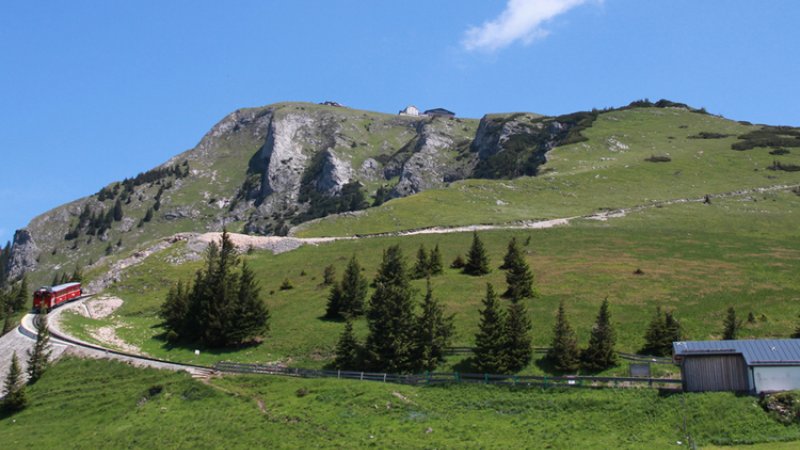 From St. Wolfgang to the Schafbergalm

From the starting point at the tourism office in St. Wolfgang, located at the eastern entrance of the bypass tunnel of St. Wolfgang, the trail goes along the street and arrives in a short time at the market square in front of the pilgrimage church.

At the beginning of the market square (signpost), the trail heads to the right through the Florianigasse and then along the Kalvarienbergweg path to the first chapel. The route then ascends stairs to the left. Keeping left at the fork, the trail continues along the shady Malersteig to a rise and then subsequently descends via stairs arriving at an intersection. Continuing uphill 50 metres along the mountain road, the trail then ascends left to the Dittlbach Stream (border between Upper Austria and Salzburg). Just beyond the stream, the trail arrives at the Aschinger snack station.

The wide Schafbergweg trail begins here. This sometimes steep trail leads to the beautiful Dorneralm alpine meadow. The route continues to ascend through the forest to the beginning of the Schafbergalm alpine meadow (trail marker). At this point, the trail has reached not only the highest (1300 m) but also most beautiful location in this stage.

The Schafbergalm can also be reached via cog railway from St. Wolfgang. Using the railway reduces the trail time by two hours. However, hikers have a 10 minute descent from the railway station in order to reach the above mentioned trail marker. Hikers having stayed the night on the Schafberg summit have an approximate one-hour downhill trek along a vista-rich path to reach the trail marker.

The trail continues to descend to the community of Winkl. After a short stretch along the forest road, the trail heads right and downhill through the forest, thereby crossing the forest road twice. From the first houses (along the street) in Winkl, the trail continues a short distance and then makes a sharp right and arrives at a street barrier. Just before this point, the trail heads left along a narrow ascent to the Gasthof Batzenhäusl restaurant and the picturesque Lake Krotensee. The castle of Hüttensein sits enthroned high above the lake.

The trails now begins its ascent to the Almkogel peak. Following a narrow road from Lake Krotensee, the trail leads between meadows through a valley to the Zeppezau farmstead. The route then ascends alongside the stream, past the former mill to arrive at a junction.

The trail continues onward, passing a new and worth-seeing chapel, to an alpine meadow. It then to the right heads up a narrow ascent to a mountain ridge. The trail continues along a forest path which is flat for some time, begins to ascend and then reaches a trail marker after a narrow climb. From here, the rugged peak of the Almkogel (1030 m) can be reached in a short period of time. Hikers who make this effort are rewarded with splendid views of three lakes: the Attersee, Mondsee and Irrsee.

From the summit, the trail heads back to the trail marker and then steeply descends to the right through the forest to the Thekla Chapel. From here, it’s not much further to the inn Gasthaus Drachenwand.

At this point, the mountains have been conquered and it’s a flat trek to Mondsee. The trail follows the street to the beautiful Church of St. Lorenz with its double towers and then continues along a narrow lane to cross the main highway. On the other side, the trail heads via bike path along the shore of Lake Mondsee and arrives at the Schwarzindien community. The trail then follows an avenue which goes along the main highway for a short time until being able to veer right to the lakeshore. From the beautiful shore promenade, the trail follows the Lindenallee into the town centre.

Many prominent figures have explored this region: nobles like Archduke Johann and Empress Elisabeth, scientists such as Friedrich Simony, poets and authors like Nikolaus Lenau, painters like Ferdinand Georg Waldmüller, musicians and composers such as Johannes Brahms. Did they ever think that hiking in the Salzkammergut might have no end? That they could tramp from one lake to the next and then onward to yet another? Day by day along the shores of crystal-clear waters? Week-long excursions through quiet valley forests, over sunny alpine meadows and up mountains fuelled by the anticipation of the next destination? Further information…

Admittedly, the landscape of the UNESCO World Heritage region of Hallstatt Dachstein Salzkammergut is the absolute pinnacle for hiking fans, mountain enthusiasts and nature lovers—unforgettable tours to incredibly beautiful mountain lodges and meadows, panorama views as far as the eye can see and cherished moments that will last a lifetime! However, you should remember that while hiking you might find yourself in high-alpine terrain. We’ve put together some resources to assist you: how to best prepare for your tour, recommended items for your backpack and steps to take in an emergency situation. Remember to always play it safe and enjoy your hiking adventure in the Salzkammergut!